In Neverwinter, every character is different. You have different classes, different stats, different gear, different boons and so many factors that come into play when building your character, so just copying some build from someone else that you found online might not always be ideal. It is far better then to actually understand the game, the stats and your characters mechanics so that you can tailor your character to your own playstyle.

When first making your character you will choose it’s ability scores. You can also reroll this later but you will need a race reroll token, so it’s best to get it right the first time. Your ability scores determine your other stats like health point or crit chance.

Choosing your scores is pretty straight forward as the game lets you know which stats area important for your character, and each class has one primary and two secondary stats that you should focus on. Not all of these are completely right though and reading on all of the is usually advised. For example CON is a secondary stat for Great Weapon Fighters but only provides defensive stats which is not good for DPS. CHA does however boost companion stats and combat advantage, making it better than CON for DPS.

STR is the primary stat for GWF characters.

Ratings or more commonly refered to as stats are the most important part of any build. When you understand how ratings work, building a character is much easier. Your base ratings comes from your Ability Scores, but can be further increased by gear, boons, companions etc. Understanding Ratings are a vital part of building your character.

The important stats to keep in mind are Power, Critical Strike, Armor Penetration, Recovery, Defense, Deflect and to a lesser extent Life Steal and Regeneration. 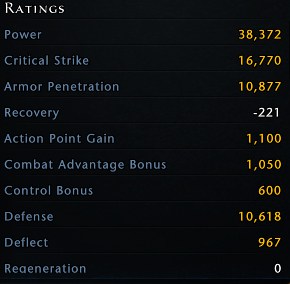 Ratings are a key aspect of understanding your characters build.

400 points in any of these stats equals 1% towards the cap, except for Amor Penetraion where 100 points equals 1%.

Power has no cap

DPS classes should in general focus on capping armor penetration and critical strike, then put everything in Power. Tanks should focus on defense and deflect, then stats shift focus to DPS stats. Healers should mostly focus on recovery and power.

If you want to learn more about ratings, stats and how they work, check out Jannenw.info.

Equipment is one of the main ways in which you get your stats where you want them. If you are wondering about how to get gear and increase your item score, see our Gearing up guide.

When you have reached end-game there is one thing though which is more important than stats on a lot of your gear, and that is the equip powers of the gear. As an example we have the Terrored Grips which as best in slot for some DPS classes, but have a low item level compared to other gear and even has negative points in Recovery. The power gives you 3% damage to all your encounter powers which far outweighs the negative stats. 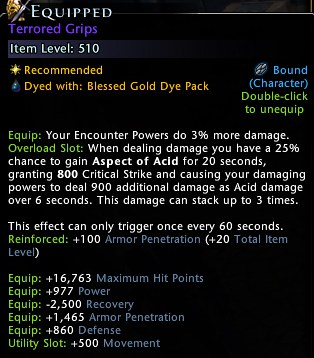 At a certain point when your item level is high (above 15k) you can start to consider whether you want to invest in alternate gear for AoE and Single target DPS as well. This can include getting two weapons with different powers and enchantments, and changing your gear and artifacts for different fights.

So when building a character, first and foremost look for good equip powers, then look at the stats. To comprare gear easily, use the Neverwinter Uncensored Ratings Simulator.

When you have capped all your important stats though, you can get Radiants for example as they give you HP or Power which doesn’t have a cap.

If you want more info about refining your enchantments, see our refinement guide. 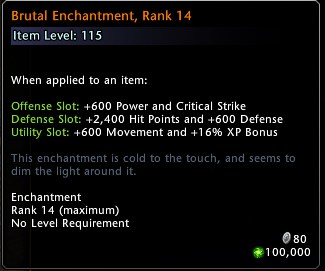 Enchantments with more than one stat are generally better.

Also remember reinforcement kits, food and potions in your build for additional stats.

Another important part of reaching your stats is getting good companions. As you propably know using Bonding Runestones on your companions will allow you to transfer their stats on to you, and with high rank runestones, it will amount to over 150% of your companions, stats, meaning a lot of stats. 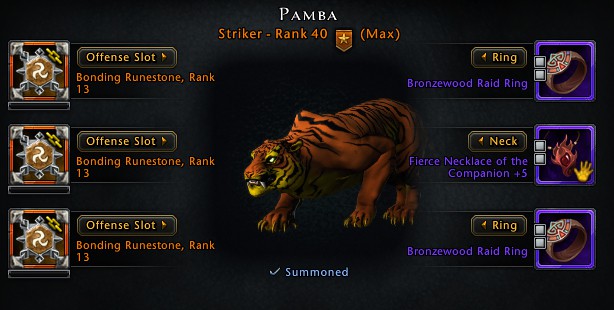 The Chultan Tiger is a good example of a companion with good powers, active power and gear slots.

Good gear for companions means mostly rings. Legendary Rings or Epic Rings with two offensive or two defensive enchantment slots can and should be worn by your companions. Other gear with two slots can also be bought or farmed in Illusionist’s Gambit, but will cost you more than getting rings.

There are four things to keep in mind when mounting up in Neverwinter. Insignia stats, Insignia bonuses, Combat Power and Equip Power.

Next you are going to start thinking about your legendary mount or mounts. Two legendary mounts will usually be better as you can get the exact Combat and Equip powers you want. 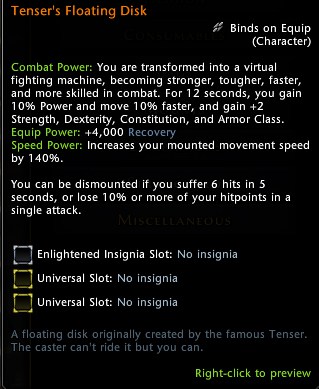 For the Equip Power, the 4000 Power from the Black Ice Warhorse is one of the most popular. But all the 4000 stat powers are good choices as long as you get one with a primary stat for your class.

Combat Powers are a bit thougher to pick, so be sure to to some research before spending a whole lot of AD on a mount.

When choosing your paragon path, personally I would recommend you to choose the path you want to play. One path is generally going to be better than the other, but but an important part of playing is not burning out and just having fun. Our class guide do however mostly support the “best” paths. Another way to find out which path is best for you is just reading up on your class and doing some google searches. The Neverwinter Reddit has a lot of info about classes and paragon paths.

When you have choosen a paragon path, it is time to choose feats. This task can look daunting at first, and it is where most players seek help to build their character. It is however not as hard as it looks. All the feats are pretty easy to understand, just take your time to read up on each one. You can also use NWCalc to make preview your build, or if you are playing on PC, you can actually copy your character over to the preview server and test out your build in-game.

With powers, playstyle comes even more into play. Try different power and see what you like and what suits your style. Don’t worry too much if you upgrade one you don’t like as at level 70 you will be gaining Power Points quickly and you’ll be able to max out most of your powers pretty quickly anyway.

Boons are pretty easy to pick. Most of the time you only have two options and they are usually one DPS oriented boon and one tank or healing oriented boon.

At the of the line you will usually have a choice between four boons. Choosing here is a bit harder but many of these boons are completly useless, so the choice shouldn’t be too hard in the end. There is usually also one that works well with DPS, one for Tanks and one for Healers here.

As a final note, you also need to keep in mind what you will be using your character for. Certain stats, gear and powers are better for group play and some are better for solo.

The most important thing here is mostly for DPS. Almost all groups will have a Paladin with Aura of Courage so health points will give you bonus DPS, so having radiants in your defense enchantments will boost your DPS. If you are soloing however you will want defense, deflect or life steal from your enchantments to max power gain from Assassin’s Covenant.

If you have any questions or suggestion about building your character, please leave a comment and we’ll get back to you!

I have a question about a rogue build people say do you know what you want Im still learning Im a slow learner. but my friends give me a hard time. I got my rogue up to 80 but my friends are not always on Im wanting a build that do good dps but if they are not on I wanna be able to play on my own if need be. do you have any suggestions?

Get the latest MMO news at MMORPG.GG